The first Magic Science class is being taught in the park today, so Vaine and I arrived there early in the morning after waking up.

There sure is some spare time until class starts though, maybe we should do a little training as we wait.

Crossy doesn’t really get up on weekday mornings, so we followed through the stretches with just the two of us.

First, with our backs to each other, we connected our arms, and taking turns we bent over, stretching each other overhead.

My body feels good with that stretch, and my drowsiness has completely disappeared. Its also nice being able to see things from this angle.

Now it’s my turn to pick up Vaine. Ah! Yup, he’s heavy, I think I just broke my hip.

“Yesterday, even though I was reading it all night long, I couldn’t understand the spellbook I got from home at all.”

I said back over to Vaine while I helped him stretch.

“I see, so Kururi does need to study.”

“Vaine, how about you, what’d you do yesterday?”

“Yesterday I was practicing my swordplay.”

“Swordplay huh? That’s rather diligent of you.”

With my reply, for some reason Vaine stopped moving, he just stood there without even acknowledging that he stopped.

Since it was my turn to stretch, I turned my neck towards him in dissatisfaction.

That’s when I saw it. To my left, right in front of Vaine.

Was it lion?! Nope, it was a cat. Vaine probably stopped moving because of this.

Its face wasn’t one that said it had a terrible attitude, in fact, its eyes were actually a little cute.

Somehow it also gives off the atmosphere of a kitten.

Even if it is a kitten though, it’s big. Even though it’s a cat, it’s the size of a human. A huge furball.

It just spoke to us.

“Hey Vaine, do you want to go somewhere together with Crossy and I this weekend? Just the three of us.”

Big?! Isn’t that what we should be calling you?! …Don’t answer that.

Is this a dream?!

Vaine and I released arms, and confronted the reality that was in front of us.

No, What are you?

Vaine, hey! Did I just hear you right?! You’re going straight to the point just like that?!

“What’s the problem with that, does your teacher have to be a human, nyaa?”

To that response, Vaine whispered in my ear.

“Definitely dangerous.” I whispered back.

Or so you say with that nonchalantly cute face of yours, but what are your true intentions? I can’t help but feel a little suspicious.

“Then what’s your name then, Sensei?”

“There are no names for cats without owners, nyaa~ Is that nyat common sense? What’s wrong with you people, nyaa?”

Oh, um… sorry about that.

Vaine summoned up his courage and raised his hand.

“Even so, you! Big guy! That no good, nyaa! Your body is strong, but your magic is so weak I can barely feel it trickle out, nyaa.”

Whew, she wasn’t referring to me. As I was sighing, she put her hand on my shoulder.

No, her paw! She just put her paw on my shoulder!

“You should learn from this one, nyaa! His body is thin compared to yours, but… nyeah, an amazing amount of magic is overflowing from him, going ‘Doppyu Doppyu (sfx: something being powerfully ejected)’, nyaa.”

I’m happy about the compliment, but stop looking at me like that!

“You look like a promising student, nyaa. What’s your nyame?”

Vaine placed his hand on my shoulder too, what a chilling moment.

What?! What are you thinking about?! No, don’t answer that! I already know!

“Neko-sensei is the instructor for magic science, right? So does that mean you can use magic?”

As she said so, Neko-sensei activated soil magic, creating an image of herself in the dirt.

I think her feet were a bit longer, and her eyes were sharper, but let’s not worry about that now.

Closing in on Vaine’s ear, I whispered.

“Is she the real thing?”

“What are you guys whispering about, nyaa~? Since a while ago.”

“I have a question! Neko-sensei, how much do you sleep in one day?”

“Umm… You’re a cat.” Vaine said in an undertone.

“What of it, nyaa? I can still teach you magic, nyeah? Why don’t we study a bit for meow, since it’s still too early for class to start anyways. A little prelude to what I can expect from you in class perhaps, nyaa?. ”

Saying “Go on, don’t be shy”, she rushed Vaine into using magic.

With his magical power, he changed the area in his palm into an open flame.

After looking at the flame for a while, Neko-sensei started shaking her head, “That’s no good, nyaa. Meow why don’t you try Kururi-chan?”

Feeling useless, Vaine went to sit down beside Neko-sensei with his head hung down.

Whatever, lets do this.

It was my turn, so trying to think of something that others wouldn’t do, I created an image with the same dimensions of Neko-sensei in my head. Creating the materials and changing their form into the shape I thought of while maintaining it.

It’s something that I mastered quite a while ago.

“Nyeah, your artistic sense is no good. It’s not beautiful enough, nyaa. Though that was a beginner level spell… Well, okay you pass nyaa.”

And so began my training in how to create the ideal form of Neko-sensei.

“Neko-sensei, what is magic in the first place?”

“That a secret, nyaa. You and Vaine-chan over there are outsiders so I can’t say, nyaa.”

Although Vaine didn’t seem to be that interested, isn’t this a good chance?

Not even the spell books written by Chris Helan could describe what magic really was.

Magic is special, there’s even unique magic that can take the world for a spin if it wanted too.

Neko-sensei answered as if she was reading my thoughts.

“What an irregular study session, nyaa. How capricious, nyaa.”

“Adding meat to it is good nyaa, but salt is no good, nyaa.”

“How you’re scratching me is no good, nyaa. Doing it like this is only sexual harassment, nyaa.  You can scratch me just under the chin if you want nyaa.”

Vaine and I practiced with Neko-sensei until we were tired, and eventually the other students started to appear in droves.

Please don’t do this anymore! I already did this earlier!!

I lighted a box into flames on the palm of my hand.

This much is easy.

Hmm… later let’s see how far I can take this spell.

Without difficulty about a third of the class was able to cast the spell. This is the A-class too… I wonder how much the other classes struggle?

Looking around, the prince and Rail were able to cast it without difficulty.

Vaine was only able to produce a small amount, resulting in him getting chastised by Neko-sensei “You’re still only leaking out a small amount, nyaa. You should work more on your output nyaa.”

“You have potential, nyaa. Same with you, nyaa.”

Neko-sensei stopped her feet in front of Eliza and Iris.

Ever since that matter with Eliza, she’s glared at me whenever she got the chance. I wonder if she’s in a good mood today though?

A sharp amount of ice suddenly spread across the ground from Eliza. Well, that answers that question.

Luckily nature change was one of Iris’s specialties, so she easily melted it, turning it back into clean water.

Although recently I’ve heard rumors about her relationship with the prince here and there, it seems like it’s still developing.

For the two to really fall in love, first they need to overcome Eliza’s bullying. Fortunately for them, it looks like Eliza is targeting me right now instead.

So you can stop glaring at me you know?! It’s unnecessary! Like come on! Why me!

Shamelessly, Prince Arc approached me while calling me out.

Are you here for what I did during your date before?!

“It looks like you know your way around magic as well. So why don’t you and I have a match? Well? What do you think?”

“Stop it Arc, aren’t you troubling Kururi-kun? I’m sorry the prince said something so strange all of a sudden.”

The first prince was pulled away by Rail, returning to his original position.

Somehow, I was saved.

Neko-sensei walked around, giving advice to each individual.

She’s a surprisingly empathetic teacher, unlike her appearance.

“That’s no good, nyaa. You need to focus more on the hip.”

“How old am I, nyaa?! Why would you ask something like that, nyaa?!”
She’s a serious teacher… probably.

TN: They’re probably stretching like this if you’re curious. 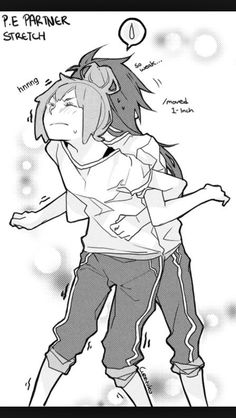 Donations are solely for those of you who want to support me in what I do. Thank you in advance!
But if you can't donate, please consider whitelisting the site on your adblock, I'd really appreciate it. (^^)/